The 2021 Index on Torture was measured in seven countries of the OSCE region: Armenia, Belarus, Kazakhstan, Kyrgyzstan, Moldova, Russia, and Ukraine.

In 2020, experts of two Working Group members, the Public Verdict Foundation and the Association of Ukrainian Human Rights Monitors on Law Enforcement, developed the Index and conducted the first pilot measurement in eight countries of the OSCE region using their 2019 data. The Index was calculated for each country based on measurements reflecting the State's performance in areas such as torture response mechanism, judicial review, statutory prohibition of torture in domestic legislation, procedural guarantees designed to prevent the use of torture, torture prevention instruments in place, and whether the State has fully ratified and implemented the international standards on the prohibition of torture.

Following the pilot measurement, the Working Group held a series of consultations to review the Index parameters for a more comprehensive approach to assessing the situation in each country. As a result, a number of methodological adjustments were made, e.g. certain indicators were added or refined, and criteria were balanced to reflect both the regulatory framework and the law enforcement practice. In addition to this, a new section has been added in which the effectiveness of torture investigation is assessed based on surveys of relevant experts, such as lawyers, prosecutors, judges, and criminal investigators and human rights defenders.

Today, we present the results of the third Index measurement.
​ 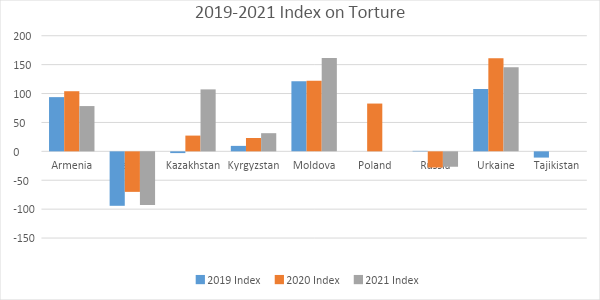 The summary data above reflect both positive and negative trends. For example, a significant increase in the Index value for Kazakhstan is due to a major improvement in the transparency of various statistical data. Certain types of data which in previous years were either inaccessible or accessible only upon request are now, according to experts, publicly available at websites of government agencies. Furthermore, the Ministry of Health of Kazakhstan has launched a pilot project to introduce the use of standard forms for documenting physical injuries and psychological damage caused by ill-treatment. This, beyond doubt, is an extremely significant development for the implementation of the Istanbul protocol. Kazakhstan has also amended its Criminal Code to introduce tougher sanctions for the crime of torture.

A decrease in the Index value for Armenia is mainly due to the ongoing criminal justice reform and the uncertainty of jurisdiction emerging in the second half of 2021 as the authority to investigate torture was transferred from one agency to another without proper information and communication regarding the change.

As before, Belarus and Russia demonstrate the worst performance of all countries observed.

The 2021 measurement reveals a general trend across the Index countries – except Russia and Belarus – towards better responsiveness to enquiries about statistical data as well as more consistent open-access publication of such data online.

In the early 2022, the situation in a number of countries covered by the Index changed drastically, primarily due to Russia's military aggression against Ukraine, affecting the entire region, and the January 2022 protests in Kazakhstan. The Working Group finds it important to supplement the 2021 Index with brief status reports for each country to discuss the current situation as it relates to the key aspects of the prohibition of torture and to outline the main challenges arising in 2022 that have implications for the country's ability to enforce the ban on torture.

See country profiles and status reports for details of each country's Index score.

Working Group members from the following countries contributed to the Index preparation:

International Bureau for Human Rights and Rule of Law, Kazakhstan