Does public opinion exist in Belarus?

The whole system that should ensure a functioning public opinion in Belarus is perverted.

Public opinion is not characteristic of a society by definition; we cannot judge that public opinion exists just because polls and sociological surveys are being conducted and there are decades worth of databases of the results.

Public opinion is often compared to a mirror that reflects reality. But there is a second part of the process; this reflection is supposed to affect the reality it reflects as well; correct and change it. A society that looks into a mirror of public opinion does not just admire its own beauty or despises its ugliness, but also can improves its “looks” — just like a person can correct their make-up, straighten their tie or even decide to undergo a plastic surgery.

Before we try to understand how this mirror works in Belarus let us consider several basic issues that define public opinion as such.

The first notion is an object of public opinion, i.e. issues or areas public has opinions on. Not any issue can become such an object; it only applies to problems that can arouse discussions and represent an issue of public interest. This public interest does not exist itself; it is formed as a certain political agenda that is important for a society. The question is who set sets this agenda and how it is set. In a democratic society it is set in intellectuals’ discussions, political debates, public campaigns. They formulate questions that require an attitude or an opinion from a wider community.

But the mere existence of these questions does not lead to formation of public opinion on them; it has to be inspired and formed. Methods of formation of public opinion vary from elections and political campaigns to the daily work of mass media, public discussions, opinion polls. All these institutions work to transform formulated questions into the societally important ones that require the public to respond or take a stance on.

And here comes a question, the answer to which seems so obvious that almost no one bothers to ask it in the 21st century: who is the subject of public opinion? The obvious answer is “the public” or “society”. The real question is how we define a society that can have “public opinion”. Pierre Bourdieu, a French sociologist, anthropologist, and philosopher, seriously questioned an ability of every individual member of a society to have a relevant opinion. [Baring this in mind, it is difficult to think that a society as a set of all individuals can be a subject of “public opinion”.

Thus, the subject of public opinion can be a part of a society that is capable of competent political judgement about a public agenda. The opinion of this part of a society reflects results of intellectual battles, discussions, social innovations and political programmes. Desire for inclusion of all population of a society in this “subject” is a true democratic ideal to aspire to; but this ideal is rather utopian. So, there is a clear difference between a society as a simple aggregate of all individuals affected by a joint public agenda – and a society as a subject of public opinion. However restrictive and undemocratic it may sound, we have to take this difference into consideration, as well as the fact that when this discrepancy reaches a certain level, public opinion as a social institute ceases to function.

There are various forms and channels of expression of public opinion and they correspond to the methods of formation of public opinion we mentioned above. Election campaigns inspire public opinion on a direction of development of a country; referenda make people formulate their opinions on issues in question; their results finalise these processes. Media play a dual role; on the one hand they are an instrument of formation of public opinion, on the other hand, they are a platform of an open public debate that allows various arguments to be presented. Opinion polls represent a range of views and suggest reference points for politicians, public figures and a society. All these channels allow public opinion to influence the agenda, the content of discussions among politicians and intellectuals, and decision-making in the end.

We have described a rather ideal or theoretical type of functioning of public opinion. It shows that the “mirror metaphor” over-simplifies its understanding; it is rather a complicated system of mirrors that reflect and distort each other’s signals, and create quite a sophisticated image as a result.

Now let us have a look at the situation in Belarus through such a notion of public opinion. The space of public politics in Belarus is absent as such; the space of intellectual discussions is shrinking. Despite these facts the agenda of the most vital issues that must be in focus of public opinion is quite obvious. The country is stuck in uncertainty as it has not answered some basic questions any development is impossible without – from the problem of geopolitical choice (or “the choice of the future”) to the issues of historical memory (or “the choice of the past”, if you like).

Language, social and economic setup, Western or Eastern way of development, law-based or social state – here are just some of the questions there are at least two contradicting answers to in Belarus. And neither of the two camps have significant influence or a comprehensive programme of work with public opinion on these issues.

The authorities of the country don’t have such a programme. It may sound a bit paradoxical, but Belarusian authorities don’t have any strong influence on public opinion either – just because they don’t deal with the subject of public opinion, they only deal with “people” or “a population” they try to control with the help of a system of social and economic balances.

Political opposition has been losing its influence on public opinion during the past decade, and at the moment it has lost it almost completely. The opposition has lost support among civil society and intellectuals as well; thus they have started going down the same road of “dealing with people” as the authorities do. The proof is a growing appeal of the idea of populism among the oppositional forces. So, instead of elaboration of strategies and programmes to address the vital issues for the Belarusian society, the opposition try to address people and “gather their wishes”. The problem is there are no mechanisms to make those wishes come true.

The alternative political agenda in Belarus has been concentrated more and more in civil society and cultural underground; but as subjects of public opinion themselves, they don’t have enough potential to inspire massive processes of formation of public opinion on significant issues. This has to do more with peculiarities of self-identification of civil society, rather than with conditions of work or organisational weaknesses.

In such a situation media and opinion polls find themselves in quite an ambiguous position. Let’s leave the state media that function as propaganda tools alone. Independent media have to be guided by their own understanding of “general democratic values” and audience needs – because there are no other clearly identified public agenda setters. Thus, it is difficult to be a platform for sensible public debate. It results in a situation where the public opinion-setting work of the media cannot be effective as there is nobody to take note of it and use its results, if there are any.

Sociologists find themselves in a similar position. In fact they have to combine the roles of an “agenda setter” or a “public customer” – and of a researcher. The absence of a real public request for surveying and measurement of public opinion – as well as actual space for implementing their results – make any poll, however deep, mass-scale and methodologically perfect, quite useless.

Thus, the whole system that should ensure a functioning public opinion in Belarus is perverted. If we recall the “mirror metaphor”, all spaces or mirrors in it exist in parallel realities and create a “labyrinth of reflections”, where the subject of public opinion seems to be completely lost. Unfortunately, Belarus cannot boast of a large number of people who are capable of formulating a responsible political opinion that have a potential of influencing the situation in any area. The number of these people is decreasing rather than growing.

The only chance for a change is to alter the positions of mirrors.

Aksana Shelest for Index on Censorship. Photo by photo.bymedia.net 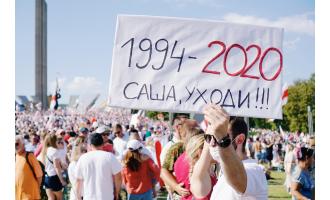 The Situation in Belarus: Crimes Against Humanity of Deportation and Persecution 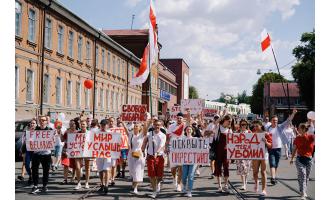 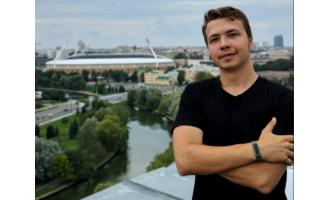